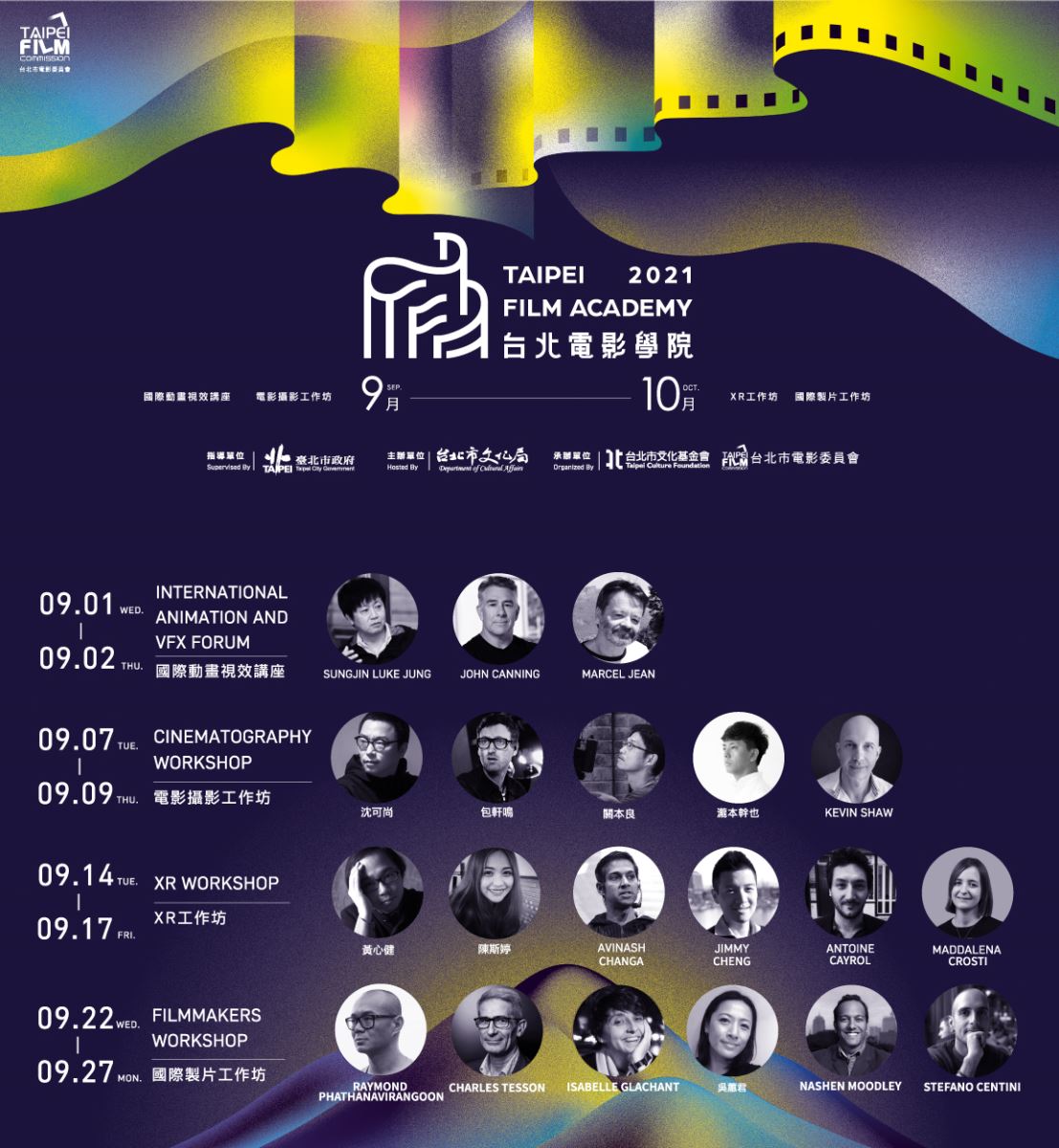 *Contents and speakers of the event might be adjusted in response to the status of the COVID-19 situation.

This year, even with COVID-19 raging across the world, Taipei Film Commission strives to provide the audiovisual society in Taiwan the best opportunity of staying connected to the world, and a comprehensive curriculum that will definitely benefit the participating filmmakers once we weather this storm together.

In its 8th edition, the 2021 Taipei Film Academy comes to you with series of workshops and forums targeting film talents in Taiwan, including “International Animation and VFX Forum”, “Cinematography Workshop”, “XR Workshop”, and “Filmmakers Workshop”. Working alongside with Netherlands Office Taipei and Bureau Français de Taipei, we aim to give Taiwanese film professionals a profound opportunity to learn from the best and highly experienced lecturers while getting well connected to international market and to broadening their filmmaking horizons.

1.  The event will be adjusted in response to the COVID-19 pandemic, safety measures will be conducted on-site, and to update in accordance with regulations of the Central Epidemic Command Center.

2.   Applicants have the obligation to make sure all submitted information are true and accurate, and to ensure the submitted project does not infringe the intellectual property rights of any third parties, and/or violate other legal regulations. Taipei Film Commission disqualifies an applicant’s participation in any future of its events and announces all dishonest applications on its official website. If the applicant has already acquired certificate of the workshop after his/her dishonest application was disclosed, he/she shall return the certificate to Taipei Film Commission immediately and is the only person liable legally. Taipei Film Commission will be free of legal liability.

3.    In the event work and classes are announced suspended by the Taipei City Government due to force majeure such as natural disasters, acts of terrorism; labor disputes or stoppages; war; government acts or orders; epidemics; pandemics or outbreak of communicable disease; the courses of the day will be canceled without notice.

5.     If controversies over the application or interpretation of this enrollment should occur, the situation shall be settled according to legal regulations of Republic of China (Taiwan). The applicant agrees that any litigation arising from this Workshop shall be subjected to the jurisdiction of Taipei District Court in the first instance.